Killrazer is a metal band from Sydney, Australia that plays a mix of old-school thrash and death metal. Featuring some of the most well-known and experienced musicians from the Sydney metal scene, Killrazer’s sound is highlighted by a blistering twin-vocal attack, crazy guitar shredding, brutal drum work, along with an intense and commanding live show.
As well as being one of Sydney's top headline metal acts Killrazer have supported a number of internation touring bands including Children of Bodom, Malevolent Creation, Sodom, Vader, Krisiun and Dismember. 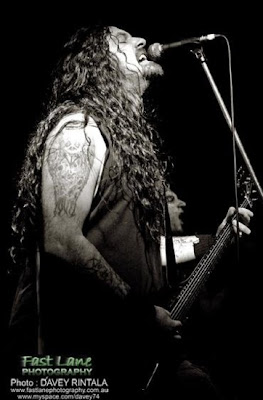 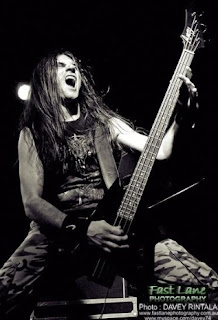 The boys served as the backing band for Paul Dianno – the legendary original singer of Iron Maiden – on his 2009 and 2010 Australian and New Zealand tours. This was a first for any Australian metal act. Rather than simply supporting an international metal artist, they professionally and capably toured as the actual band. So knowing that, how freakin’ huge is it that we have these guys for
INSTITUTIONALIZED FEST 2013
HUGE!!!!!!!!!!!!!!!!!!! 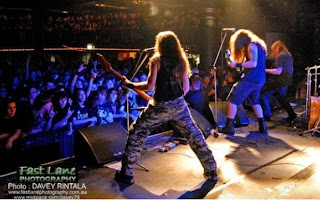 
If you weren’t sold up until today then let the blistering power and intensity of Killrazer do the job for you!

Get a ticket and get to the SQUARE! 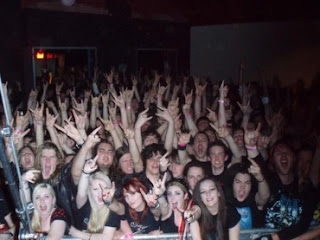 Darker Half is a melodic metal band hailing from the great harbour city of Sydney. The sound of the band is rooted in traditional metal but they also draw on many other influences, be it in the realm of metal or otherwise, creating what plaudits label as a unique, energetic and heavy sound.
Twisted dual guitars and explosive solos riff across a rock solid, yet inventive rhythm section, topped off by a vocalist whose range can match it with many of the rock greats! It makes Darker Half a band that can really set themselves apart. 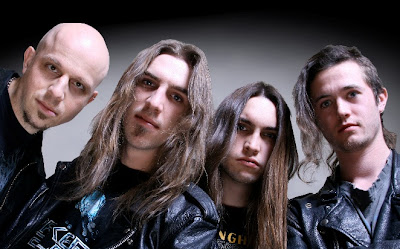 Darker Half released their debut album ‘Duality’ in 2009 and after national tours supporting Paul Di’anno (ex-Iron Maiden) and US metal legends Queensryche, regional/interstate headlining tours and an appearance at Screamfest 2009/10 at the Enmore Theatre along with Edguy, Sonata Arctica, Dark Funeral and more, these guys established themselves as one of Australia’s top metal acts. This is exactly the reason that Darker Half have the main support act slot for INSTITUTIONALIZED FEST 2013!!!!
During 2010 the band toured relentlessly and after hooking up with Di’anno once again on his return turn that year, went into Defwolf Studios in January 2011 to record their second album ‘Desensitized’, signing Australian deals after that with Rockstar Records and MGM Distribution for the release. 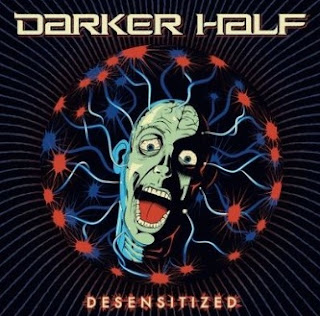 The band toured Oz in support of their album which saw them return to interstate capital and regional centres multiple times and score support spots with Alestorm and Children of Bodom to rave reviews.
It’s with great pleasure and anticipation that we welcome Darker Half to the INSTITUTIONALIZED FEST line-up and we look forward to seeing them get the raucous INST-FEST crowd into a heavy frenzy!!!!
﻿
Posted by Unknown at 19:22 No comments: 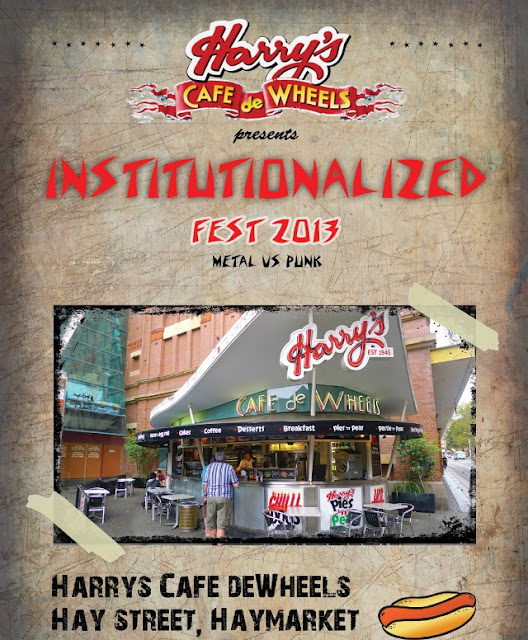 You know, the original Harry's cafe de Wheels is over 70 years old, and has maintained a tradition of delivering fresh pies daily...
Harry's cafe de Wheels is iconic and occupies a unique corner of the known Sydney landscape, so in that sense we're very proud for Harry's  cafe de Wheels Haymarket to be supporting INSTITUTIONALIZED FEST 2013!!!
Harry's will be offering a discount to INST FEST revelers but you'll only be able to find the discount voucher for Harry's Haymarket in the festival Fanzine, 'FIVE MINUTES OF PAIN'
So it's easy to figure out from here, right!?
Get to INSTITUTIONALIZED FEST
Buy the FANZINE
Get the HARRY'S CAFE DE WHEELS discount
Get to HARRY's!!!
GET IT!?
GOOD!!﻿
Posted by Unknown at 23:38 No comments:

Born in 1997 out of the Wollongong punk scene, Topnovil is an authentic fourth generation Aussie punk rock’n’roll band. Heavily influenced by “77” Punk and third generation punk rock bands, you can hear where the lads developed their distinctive Punk Rock sound.

Sharing their lives, times and loves through the years; Topnovil use socialist lyrics and tunes that are fast, short and catchy in order to put on a powerfully paced show. These boys are everything you need in a punk rock fix. With truth in lyrics, they write about dealing with the cards you’ve been dealt. The art of storytelling through lyrics is not lost on this band. 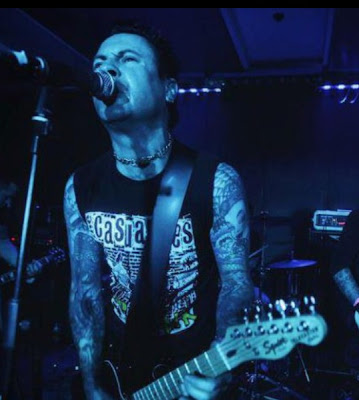 ***
So if I may as be so bold to interject right here, just for one moment. We have an INSTITUTIONALIZED ALERT!
TOPNOVIL are playing at INSTITUTIONALIZED FEST on Saturday the 13th of JULY @ the Square, Haymarket!
...OK, now back to regular programming
***
Topnovil’s extensive body of work includes festivals performances, Australian tours and International Supports. They have shared the stage with great bands such as; The Bouncing Souls, US Bombs, H Block 101, The Casualties and The Business just to name a few. They have appeared on TV including Channel V, had tracks featured on various punk compilations, released 5 Independent EP’s, an 18 track record due and a split vinyl release with Perth Rockabilly legends The Blazin Entrails. 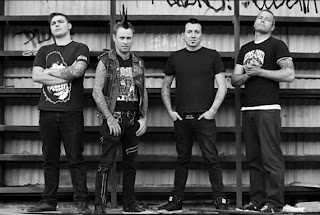 Topnovil’s on stage chemistry provides high energy and intense shows, never giving anything less. Not just another “Street Punk” band, the bass driven rhythm, guitar hooks in every tune and singalong gang vocals make you sing their tunes when times are rough.. The lads are inspired by friends, families and people that dig the music and above all to tell their story.

Given the chance Topnovil will become part of your life, with their show giving you the chance to forget yourself. It has been a long ride meeting great folks along the way, sleeping on the floors in many a punk share house. Memories of fun times drinking with the crew that come to the shows are endless and will never be forgotten. 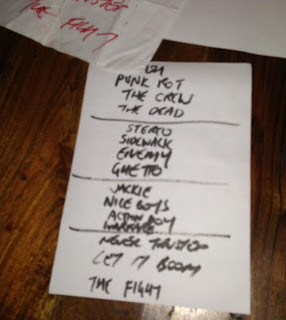 Have any of you ever had a crack at reading  Das Kommunistische Manifest written by Karl Marx and Friedrich Engels? Some of us at the INSTITUTIONALIZED TEAM have.....(zzzZZZ)...ok, my head just hit the desk out of sheer boredom, now onto something more appropriate!
KARL MARX, punk rock band out of Sydney! They have a story to tell, it's kooky as all hell but we like that, so take it away Skid
******************************************
BJ - was born in the US and has had steady jobs working for the likes of T-Pain and R. Kelly, world renowned for his ability to make any song that is good, shit. He lives Minnesota with his 14 children, and is currently dating Susan Boyle. He likes boils.

Will - grew up in a slum in South Africa, investing in a small pony and selling photos with it to tourists. After using all the profits to follow his dream of becoming a world famous clothing designer his idea was stolen by Miucca Prada and he returned to South Africa. When he was 10 he discovered that he a talent for everything, and by age 13 he had discovered the cure for aids. He now lives in New Jersey and is on-the-road vocalist for boyz-2-men, he is yet to be kissed.

Tim - Spontaneously generated from a pile of ectoplasmic goo in 1984 as a fully grown adult. Since then has had a stream of successes as a professional swimmer, he is known to catch fish by swimming faster than them, but only in water of a perfect temperature. Hixy or Ryan as he is sometimes known actually has more genetically in common with a gorilla than human beings and keeps his gorgeously smooth skin with a strict shaving schedule every morning. Adam - plays for the Parramatta Eels and is considered a leading player for the club given his experience at club and representative level. His brother Ian Hindmarsh used to play for the Eels in the same position as Adam. He is the current co-holder (with Shaun Fensom) of the world record for the most tackles made in a single game: in Round 23 of the 2007 NRL season he made 75 tackles against the Melbourne Storm. He is also believed to be the first player to make 10,000 tackles in the NRL.
"He is a machine. He hasn't got an ideal body. He's got a sway back and fat gut and funny bum. But physiologically he's got something inside him and he keeps going and going." -Brian Smith '' 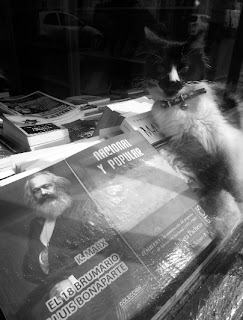 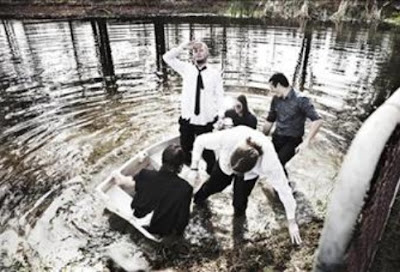 Whisky Smile is a five piece band hailing from the suburbs of Western Sydney. Drawing influence from a wide spectrum of musical styles, Whisky Smile moulds their collective influences into a style punctuated by a hard hitting rhythm section, abrasive whisky soaked vocals and catchy as hell guitar riffs. Their live show seamlessly combines an entertaining party style vibe, along with elements of today’s modern Rock, Metal and Hardcore scenes. So what else are you going to need for INSTITUTIONALIZED FEST!? I mean I have to admit, the guys had me at WHISKY, I don't even care that they they've dropped the 'e' and don't spell it in what I regard as the traditional manner, WHISKEY...then again, I'm freakin' old school, watcha gonna do huh!!? 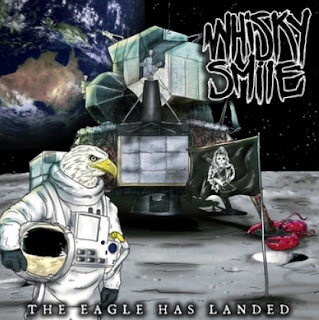 If you're keen to check out more you can download their EP here http://whiskysmile.bandcamp.com/
You can even step it up and go for the deluxe CD and t-shirt pack!
You know what else you should probably do!?
Get your self a ticket to INSTITUTIONALIZED FEST!!!
Click on the below LINK!!!!
http://www.moshtix.com.au/event.aspx?id=65694&skin=
Get yourself a ticket now at the pre-event day sale price of $18.40!!!
And remember, tickets are also available at
www.moshtix.com.au, 1300 GET TIX (438 849), on your mobile and all moshtix outlets
Posted by Unknown at 00:24 No comments:

ARTERIES are a Sydney based metal band which started out in 2011 with three mates who shared the same passion for heavy music. Soon after that they found themselves a bass player and with the recent addition of a second guitarist its helped form what ARTERIES are today, that being a diverse mixture of erratic riffs, brutal grooves and technical time signatures.
Since their very first show at The Annandale Hotel they've been winning over fans with their impressive and energtic live assaults, I mean, we know the deal, that's why we've got them on the bill for INSTITUTIONALIZED FEST ...'ah, it's all making sense you say'
The boys have kicked-off 2013 with some solid shows supporting hardcore legends such as Earth Crisis (USA) and Vanna (USA) and their show in Sydney. 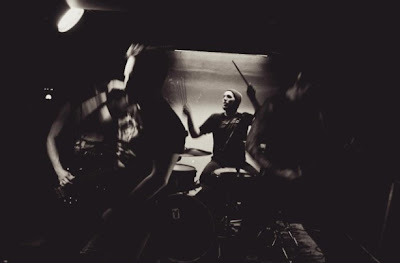 Influenced by the likes of Underoath,The Dilinger Escape Plan and Periphery, ARTERIES have just recently finished recording their debut EP at Electric Sun Studios with master engineer/producer Shane Edwards. It's set to be released a week after INSTITUTIONALIZED FEST on the 19th of JULY, but you can catch the real thing at the festival on the 13th at the Square in Haymarket....SO BE THERE!!!
﻿
Posted by Unknown at 14:39 No comments: